Town of Widows, a documentary on the fight for recognition of occupational diseases suffered by workers exposed to Peterborough’s General Electric plant’s “lethal legacy”, will be broadcast this coming Thursday (August 8) at 9 p.m. on CBC Docs POV. Co-produced by Natasha Luckhardt and the CBC, the 45-minute program follows widows and former workers over the course of three years. Seeking justice from a workers’ compensation system they say is stacked against them, the documentary “sees unassuming citizens transformed into activists.” 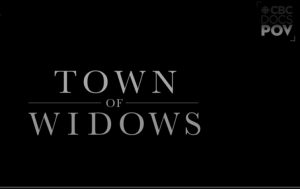 While a cluster of cancer diagnoses among former GE workers was first noted in the 1990s, many have had their claims denied by the Workplace Safety & Insurance Board (WSIB). While the Board points to 80% of over 2,400 GE Peterborough claims allowed since 1993, occupational health researcher Bob DeMatteo notes just 27% of cancer-related claims were accepted. Co-author of the May 2017 report documenting the complex mix of 3,000 toxic chemicals – a ‘toxic soup’ – used in GE plants between 1945 and 2000, his study challenged findings of GE’s 2002 mortality study and added to scientific evidence linking cancers to asbestos and other chemical exposure in the workplace.

In September of 2017 the WSIB announced a review of past rejected GE Peterborough claims that would use updated scientific research. On August 3, 2018 the Board concluded its reconsideration of 233 claims, approving 71, a number advocates say is far too low  and calls out for a public inquiry.  As Town of Widows shows, workers and their survivors will continue to fight for justice.

How else to watch the documentary: CBC Docs POV are rebroadcast the following Sunday at 6 p.m. on CBC Newsworld; available anytime on CBC Docs Youtube channel
or CBC Gem.
Follow on twitter @townofwidows, Facebook https://www.facebook.com/townofwidows

* A second occupational disease claim review, that of more than 300 claims from former workers in Kitchener’s rubber industry, is still ongoing although a July 16 Waterloo Region Record article reports the hope sparked by the review is dissolving into frustration. For many claimants or survivors, decisions upholding the original denial appear to support occupational disease experts arguments that “so-called ‘lifestyle’ factors such as smoking are too often used to dismiss illness claims.”  For updates on the review and assistance filing a claim, see OHCOW and USW/SOAR’s Ontario Rubber Workers Project.

Migrant workers with COVID-19 must not be allowed to work, health experts say — as infected worker count surpasses 1,000 | The Star https://www.thestar.com/business/2020/07/07/health-experts-urge-concerted-government-action-to-tackle-migrant-worker-outbreaks.html

Stay connected – get our blog updates